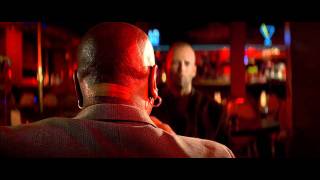 I used to be a pretty big fan of Quentin Tarantino, it's true. In the early 90s? It was hard not to. Okay, things got a little shaky after watching CITY ON FIRE, but RESERVOIR DOGS is not that film and vice versa. Sure, it would've been nice to get some kind of nod. I dug PULP FICTION a lot as well. Maybe it was the structure. Maybe it was the humor. The soundtrack certainly had a hand in it. The writing was sharp. Including probably the truest thing QT has put to film: "That

I'll avoid talking about what's really important and instead talk about movies and other things. The really important stuff is too raw to touch on directly. Maybe I'll get back to it. Maybe it'll be suffused throughout all this. Recently caught ANNIHILATION on Amazon Prime. And as a quick aside before I dig into the film, I find Amazon Prime's programming way more compelling than Netflix at this point (I mean back catalog, both companies original offerings really don't blow m

Spent the last week sick. Started on Tuesday morning with a tiny cough and by the end of the day, I was shivering on the couch. Didn't sleep that night as I was chasing things around in fever, complete wreck state by Wednesday. Didn't feel human until Saturday morning, but still mostly couch-ridden at that. Now it's just a dull sense of a combat boot laid on my chest and surprise coughing fits. Since I don't have much choice in the matter, I guess I'll take it. Worst part is

FULL BLEED: THE SECRET TO EVERYTHING AND MORE or FEAR IS A MAN'S BEST FRIEND

So in my starting on this new project, I've done more than my fair share of thrashing around. A lot. Way worse than QUEEN OF NO TOMORROWS. I guess the sophomore slump is a real thing. Or I'm letting it be real. Whichever. This has led me down some sorta dark paths. Some of them have a lot to do with stuff outside the book and me letting that seep in (dangerous -- don't do this). Some of them have to do with the way my laughable career is limping along (ditto). Some of them ha

So in the interests of feeding the Howling Pit some, I'm going to include fun links that I've found in the recent now. Might even say a bit about them. We used to call this linkblogging back in the olden days. Maybe we'll come up with a new word for it now. Quake OST Here's the ambient soundtrack for QUAKE, from 1995 or so if memory serves. It was composed and performed by Trent Reznor/NIN (don't recall who got the official credit.) It's nice and claustrophobic, downright cra

FULL BLEED: HE WHO SHATTERS

FULL BLEED: WHAT IS WITHIN YOU MAY KILL YOU

THE KINGDOM OF IS

FULL BLEED: THE PRICE OF FAILURE

FULL BLEED: NOT THE END BUT YOU CAN SEE IT FROM THERE.

FULL BLEED: FOR THE BLOOD ON WHICH WE DINE

FULL BLEED: DANCE WITH ME

FULL BLEED: WE’RE ALL AS MAD AS HATTERS HERE